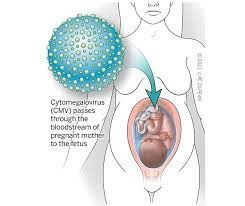 Cytomegalovirus infections are often very mild and can be successfully treated with antibiotics, but sometimes they can cause more serious problems.

One of the most serious issues that a CMV infection may cause is a blood infection known as disseminated intravascular coagulation (DIC). DIC is a potentially fatal condition in which the body's ability to clot blood becomes impaired, which can lead to uncontrolled bleeding from small cuts or even from internally bleeding organs.

In most cases, DIC develops slowly over days or weeks and does not produce symptoms until it has progressed too far. If left untreated, bleeding may occur anywhere in the body and disrupt many bodily functions such as breathing and kidney function.

People who are infected with CMV are more likely to die of heart failure or bacterial pneumonia after infection, compared to people who are not infected. DIC is more common among people who have had recent infections with CMV.

The mortality rate for children with CMV is 29%, while the rate is 57% in adults. Males have a higher mortality rate than females of the same age group, due to the tendency for males to develop severe disease of the heart, pulmonary disease, and bone disorders.

CMV infection in childhood has been associated with schizophrenia later in life. CMV may also contribute to hearing loss and cleft palate, along with other congenital anomalies.

CMV is the common cause of congenital infection. The fetal outcomes of CMV pneumonia during pregnancy include intrauterine death (IUFD) and characteristic malformations, known as the caudal regression sequence (CRS).

Teratogenic effects that can occur in infants born to CMV-infected mothers include:

The progression of cytomegalovirus infections to disseminated intravascular coagulation is not well understood.

The treatment of DIC, in particular, is very difficult to predict accurately because it depends so greatly on factors such as the condition of the patient, his or her immune response, and the type of CMV infection.

It seems likely that there are several different types of CMV infections that can progress to DIC at various rates. Even within the same infection, the rate of DIC may vary. The progression of CMV infections may be dependent on certain host, viral, or immunological factors.

Antiviral therapy is the only proven treatment for CMV infections. Children with severe disease are treated with intravenous acyclovir or other antiviral drugs. Milder cases can be treated vaginally, orally, by IV infusion, or by suppositories given together with antacids.

The treatment of DIC is difficult and each case needs to be treated individually because the success of the treatment depends on factors such as the severity of the disease and the patient's immune response.

Often, large amounts of intravenous fluids and blood products are given to try to prevent organs from failing. It may also require a bone marrow transplant and/or a splenectomy.

However, even with this treatment, some patients die from sepsis or other complications while others recover uneventfully.

What Is CMV Infection And How And Why Do We Get It And What Are The Symptoms?

CMV infection is a viral infection that is very common in children. CMV is known as the common cold of the immune system because it usually causes no symptoms in healthy people, though some infected people may experience mild flu-like symptoms including body aches, tiredness, sore throat, or headaches.

What Are The Long-Term Complications Of CMV Infection?

The most common complications are hearing loss in children and birth defects, including microcephaly, in babies born to infected mothers.

CMV can also cause hepatitis, pneumonia, miscarriage, heart problems in children and adults with pre-existing medical conditions. People with weakened immune systems are more likely to have serious CMV infections.

How Is CMV Spread?

CMV is spread through the saliva or urine or stools of an infected person. It can be passed on by sharing toys or eating utensils with someone who has the virus and it can be transmitted from mother to child during pregnancy or childbirth (congenital).