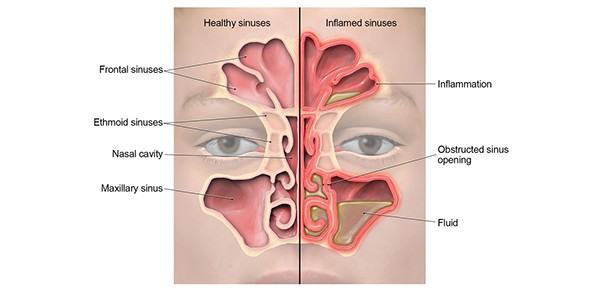 Sinusitis is the inflammation of the sinus cavities, which are air-filled spaces in the bones around your nose. The inflammation can be caused by a virus or bacteria, or it can happen without an apparent cause.

What Are The Symptoms?

The most common symptoms of sinusitis are:

·         Painful facial expressions and eye movements, especially when you bend down or blow your nose.

·         Coughing and sneezing intolerance. This happens because swollen tissues block breathing passages to your lungs and throat area.

·         Thick nasal discharge with a yellowish color and bad odor (a result of the infected mucous).

How Will I Know If I Have Sinusitis?

Many other conditions can cause the same symptoms as sinusitis. These include:

Allergy problems such as hay fever, allergic rhinitis, and atopic dermatitis; - Asthma; - Flue; - Acute bronchitis; - Ear infections; - Sinus pain due to the growth of tumors and cysts in the nose and sinuses (benign or malignant tumors and cysts); - Other types of infections such as tonsillitis, pneumonia, laryngopharyngitis, stomatitis (mouth ulcers), pharyngitis (sore throat), etc.

If you experience any of these symptoms with a high fever and respiratory difficulties, and if your doctor fails to find an obvious cause, you should always mention the possibility of sinusitis.

How Do I Know That Sinusitis Is Caused By Bacterial Infection?

The most common type of bacterial infection that causes sinusitis is purulent (bacteria-infested), due to the clogging of your nasal passages with mucous (snot). The infection may also cause inflammation in the lining of your nose and sinuses.

The inflammation may lead to bleeding inside the infected passages or displacement of mucous. Infections with viruses also cause inflammation and pain in the head and face. The symptoms of viral and bacterial sinusitis are alike, but there is one difference: viruses cause a sore throat while bacteria don't.

How Do People Get Infected With Bacteria?

You may get infected with bacteria when bacteria accumulate in your nose or sinuses. Bacteria can be spread from person to person through close contact (coughing, sneezing, etc.).

In most cases, however, people get infected from bacteria from the oral cavity (mouth, throat) or contaminated objects such as towels, dental floss, or toothbrushes.

What Is The Treatment Of Sinusitis?

Sinusitis can be treated in several ways:

·         Antibiotics - Several antibiotics may help in cases of bacterial sinusitis. Antibiotics are used to eliminate infection by killing the bacteria and treating the symptoms.

The choice of antibiotics depends on the type and cause of the infection, method, and severity of symptoms, etc. Sometimes surgery is needed to remove nasal polyps or remove growths that block your airways.

·         Surgery - Sinus infections can sometimes lead to chronic sinusitis, which in turn may cause nasal polyps (lumps on the lining of your nose) and deformities of the sinuses. These resulting problems can be corrected through surgery.

What Are Nasal Polyps?

Nasal polyps are lumps that grow inside your nose, just under the lining of your nose, which can cause breathing problems.

Nasal polyps are small soft masses that look like grapes hanging from the inner lining of your nose or sinuses.

They can be solid or they can have holes in them allowing mucus to drain out. The growth of nasal polyps is mainly due to chronic rhinitis (inflammation of the lining in the sinuses).

How Are Nasal Polyps Diagnosed?

When you have dry mucous membranes, visible polyps may be identified during a physical examination. Your doctor will examine the inside of your nose with a pharyngeal flashlight or endoscope to look at the inner lining of your nose.

A plastic tube will be inserted into your nose to remove samples for laboratory testing. A biopsy (a piece of tissue taken from an affected area) is also useful in diagnosing nasal polyps.

What Are The Treatment Options For Nasal Polyps?

The main treatment option for nasal polyps is surgery, which involves removing or surgically dissolving the growths that cause them.